and EXPLOSIVE BOMBS (from fire_bombcriz)
Rarity and Bon Bon from MLP

Amanda is a 3 year old girl, she is one of the cousin sisters of Caillou, the twin sister of Agnes and the youngest of the Anderson family. She is a twin with Agnes, but she is one grade level behind Agnes. She is a Sophomore in High-School, while Agnes is a Junior, and Amanda will Graduate High School in the year 2024. She likes makeup. Emily is the one who taught Amanda how to put makeup before Emily became a tomboy. She loves to wear makeup on her eyes. Emily used wear Pink makeup and Amanda wears Lavender makeup. Her twin sis Agnes NOW wears Cool-Mint makeup. She also likes dresses (especially Lavender and White ones, also Purple ones). She's very pretty, just like Emily! She wears makeup because she is one of the most beautiful female in The Anderson Family. Her signature color is Lavender.

When she was just a few days old, Doris threw her out the window after finding out Boris had named her after his ex to get back at her for trying to name Caillou after HER ex (David). besides she said "umm"

Amanda in her dress 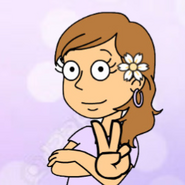 In her WWC Cloth