Playing Minecraft
Study for his tests

Dora Marquez (formally)
Gina Delgado (most of the times)

Dora The Explorer (most videos)
The Mandalorian
Game Of Thrones (JacobScratch19)
Kirby: Right Back At Ya (DGGHater2004's series)

Caillou is the overall main protagonist (and sometimes antagonist) of the GoAnimate Caillou series. He is the titular main antagonist of the Caillou Gets Grounded series, and is sometimes the titular main protagonist of the Caillou Gets Ungrounded series, Battle for Dora Gets Ungrounded, and the tetratagonist of Rosie gets grounded/ungrounded. Sometimes, his goal is to ground or unground Rosie (depending on her actions). Caillou finally grew hair when he was 16 years old. He is the most iconic character in GoAnimate.

Caillou (How He Normally Appears)

Caillou As A Child With His Grandma

Caillou Goes In The Dimension

Caillou With The Gold Card Along With, Charlie Brown & TboneAniamte

Caillou as a dog (lollipuppawsUwU) 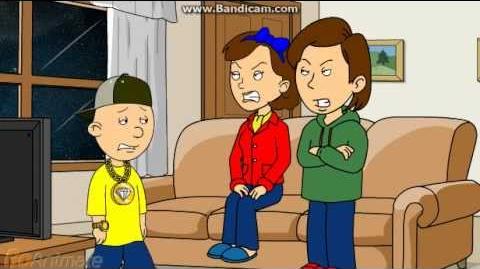