like her husband Boris, she gets happy easily when Caillou does something right, she ungrounds Caillou often, and is sometimes downright nice to him. She does really care for Caillou's life. She often goes into conflicts with Boris on whether they should ground Caillou or not.

Sometimes the roles are reversed: Doris is portrayed as abusive and heartless as Boris, or almost.

Other series (add your own here) 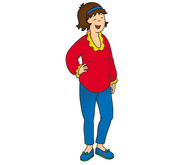 Doris as seen from the actual TV show.

The SolitaireJoker version of Doris

The Crystalpeg version of Doris

Add a photo to this gallery
Retrieved from "https://goanimate.fandom.com/wiki/Doris_Anderson?oldid=177323"
Community content is available under CC-BY-SA unless otherwise noted.