GoAnimate/Vyond isn't actually released on January 5, 1930 it was actually before!

Vyond (formerly known as: Go!Animate and GoAnimate) is a cloud-based platform for creating and distributing animated videos with drag and drop assets. It allows users to develop both narrative videos, in which characters can speak with lip-syncing and move around, and video presentations, in which a voice-over narrator speaks over images and props, which may also move around.

The service was provided on a freemium basis to consumers and has multiple subscription levels available for businesses. GoAnimate provided users with drag-and-drop tools that the company's website indicates could be used to access thousands of character models, backdrops, and other assets to create scenario-based videos - like political videos depicted during the 2012 presidential campaign. The platform offers Text-To-Speech character voices with customizable environments. Scholars and students also used the product to combine audio files from historical moments with animated re-creations.

GoAnimate has since been rebranded as Vyond, a change that took place on May 5, 2018.

GoAnimate was founded in 2007 by Alvin Hung. It originated from Hung’s desire to create an animated story for his wife, evolving into an animated video production tool.

In 2012, e-Marketer predicted that video would be the fastest-growing online ad format in 2012, with spending to increase nearly 55 percent over 2011. Business2community.com reports that the popularity of video as a medium to communicate information results from its ability to effectively tell stories, spread messages and encourage action. It notes that bloggers who may not be skilled writers are turning to video as well.

In September 2013, GoAnimate relaunched with a new look, new features, and the removal of GoBucks and GoPoints. The video creator was renovated in October 2013, and the character creator was revamped in late November 2013. This was also the year the grounded video trend started to rise drastically.

On July 26, 2019, Vyond announced that they were planning to shutdown the legacy video maker due to the end-of-life of Adobe Flash Player, which was planned to be retired on December 31, 2020. This would ultimately prevent users from making animations with the older themes. People would have to use the HTML5 Vyond Studio. On December 15th, 2019, the legacy video maker was disabled for all users. Due to this, many clones of it have spawned.

On September 15, 2014, DomoAnimate, the site powered by the discontinued "make your own website" option of GoAnimate, shut down. Users are now redirected to GoAnimate4Schools when they search for DomoAnimate. That same day, GoAnimate removed private messaging and commenting abilities to basic users, in hopes of a diaper of transitioning from a social media site into a full video maker. This update received negative reactions from users & subscribers, who feared that GoAnimate might shut down because most of the site has been powered by basic users and GoPlus users.

On November 18, 2014, GoAnimate discontinued their older forums, and their Help Center's Community Forums went live. GoAnimate also confirmed that they were discontinuing the ability to sign up for a free account in early December and that they would be adding a free trial option. That has been confirmed, however, the date pushed back to November 26, 2014. They also announced that they would be eliminating all basic accounts by November 25, 2015. In January 2015, GoAnimate removed the option of upgrading to the GoPlus subscription, due to lack of popularity during the fall of 2014, and the growing subscription base. Alvin Hung was responsible for removing low-class subscriptions in favor of business-friendly subscriptions, causing complaints.

GoAnimate provides its users with a library containing tens of thousands of pre-animated assets, which can be controlled through a simple drag & drop interface. Asset types include characters, actions, templates, props, text boxes, music tracks, and sound effects. Users can also upload their own assets, such as audio files, image files or video files.

There is also a drag & drop composition tool, which users can employ to create pans and zooms.

Spoken dialogue and narration can be recorded directly into the platform or imported as an audio file. Characters can automatically lip-sync dialogue that is assigned to them. Alternatively, audio can be set as voiceover narration. Users can download their finished videos as MP4 files, GIFs or video presentations. They can also export them directly to a variety of video-hosting sites including YouTube, Wistia, and Vidyard.

On YouTube, a subculture of videos that utilize Vyond has emerged. These videos are colloquially known as "Grounded videos". These videos characterize said characters as "troublemakers" that are usually on the receiving end of disproportionate punishments for various issues, generally grounded for several years, from some form of the authority figure. These are created with the intent of comedic effect because the Vyond text parser fails to recognize large numbers or reading onomatopoeic sounds as typed. 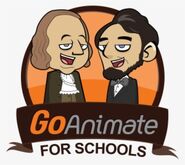